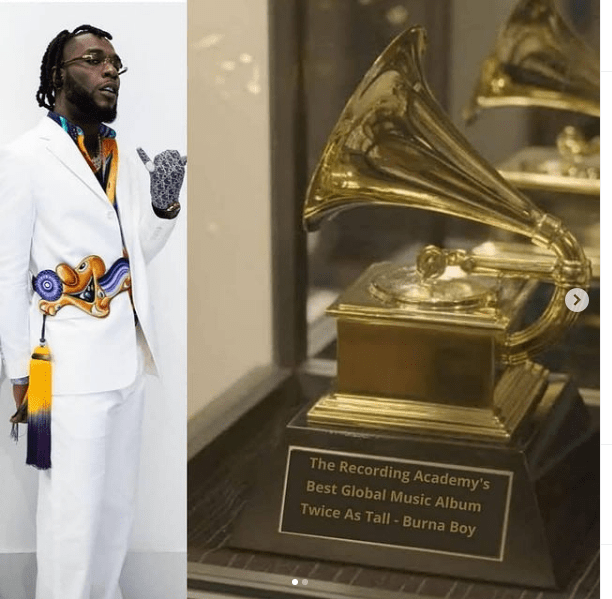 “This is a big win for my generation of Africans all over the world”.

“This should be a lesson to every African out there: No matter where you are, no matter what you plan to do, you can achieve it…”

Wow! what a great acceptance speech that was.

Burna Boy a.k.a The African Giant said he wanted a grammy and indeed, he won. With the one goal in mind, the African Giant did with the album, “Twice As Tall” and not only did he score big for himself, he has set an incredible precedent for a lot of made and aspiring African artistes around the globe.

Although Burna Boy isn’t the first African to win a grammy, he happens to be the first Nigerian to take home the award. Many Nigerians including Afrobeat pioneers; the Kutis, Sunny Ade and even Burna Boy had previously been nominated at different times for a Grammy award but none have been able to clinch the ultimate prize. Burna Boy won only in his second nomination with the same album for which lost to Beninese singer “Angelina Kidjo” in 2020.

Burna Boy definitely isn’t the most talented artiste in the country or in Africa but his tenacity, hard-work, goal oriented mind and push beyond boundaries won him his gold. Unlike many other artistes who stay in a box and never aspire beyond the comfort and trend of their countries’ popular genres and style, Burna Boy was ready to transcend that limit with a relentless work ethic, planned and circumspectly upheld towards winning a Grammy— reason why the “Twice As Tall” album won after all ..

I will like to say Burna Boy is the African Drake. We all know he was going to win the second time because unlike African Giant which came from a place of pure creative genius , “Twice As Tall” was planned towards achieving these feat (winning the Grammys). The features and songs, the choice of instrumentation and style of writing was to get more attention and mass appeal beyond Nigeria and the Africa continent. While the album might have done great in the diaspora, it wasn’t so popular with fans back home.

Songs like the political conscious “Monsters You Made” featuring Chris Martin’s and the Pop/EDM “Way Too Big” are the songs that upscaled any other songs released from Africa in the last decade. We can’t deny the fact that the features on this album (which fuses African/Diaspora artiste) was well curated as a piece that could challenge any global album in the world.

In the 2019 Coachella Festival Concert where he performed for the first time, his name was written in smaller font and listed below the big players who were headliners of the show. And He got this to say at the time : “I don’t appreciate the way my name is written so small on your bill. I am an AFRICAN GIANT and will not be reduced to whatever that tiny writing means. Fix things quick please,” he wrote.

Indeed, he has fixed things as he now steps out, henceforth, as a global music icon because that’s what the Grammy adds to your credentials. This means he will get more exposure working with other international artistes, he gets paid more money in features and lock down more international shows. As a matter of fact he gets to headline shows with other big names like Beyonce, Drake, Jayz , Chris Martin’s e.t.c .

Now you know what comes next…yet another Grammy! if he keeps up the pace.

So Burna Boy just broke a record as the first Nigerian to ever win a Grammy and this is a big win for Afrobeat as a genre because it means the genre (Afrobeat) is here to stay.

That for certain is something that will give many Nigerians joy because it puts Nigerian and Africa on the map for good. And hopefully with Wizkid getting a Grammy nod/win too for his support on the Beyonce “Brown Skin Girl” song, it’s evident that more Nigerians will be nominated in following years and probably win the award too— a great opportunity for other Nigerian artistes to not only work hard in their craft to get up the echelon of the music industry but also an open door for them to come up higher in creative arts bold and fearless in showcasing their artistry.

The post ‘Burna To The World’ – Impact Of The Grammy Win On Nigerians & Africans appeared first on tooXclusive.