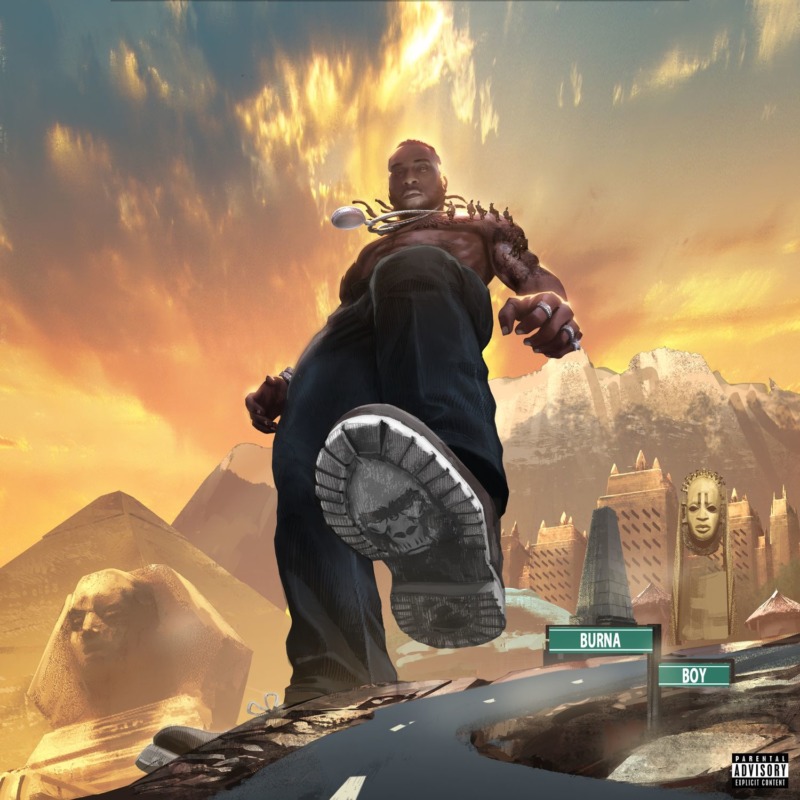 On Today’s Episode of ThrowBack Thursday, We Would Be Sharing The Production (Producers) Credits Of The Grammy Award Winning Album – “Twice As Tall”, delivered by Burna Boy With Our Viewers. We’d Hope Y’all Find This Interesting Informative Content, Nice and Useful….

It’s not ever easy to predict where Burna Boy will turn his attentions to next. “I move with the spirit, and when it takes me,” OluwaBurna tells Apple Music. “It’s not too calculated for me when I take my steps, but when I move I’ll know if it’s right.” In 2019, Burna Boy called for a fearless revolution across the continent and the worldwide diaspora with the ‘African Giant‘ Album. The album earned him artist his first Grammy nomination and centered his ambitions: to empower African youth to access their power, on their own terms. “Twice As Tall“, his fifth studio album—sees Burna Boy reassess the world around him from a new atmosphere just 13 months on. Sean “Diddy” Combs joined as executive producer, and the album carries a unifying sense of pan-African idealism. “We had about 80% of the album ready before Puff [Combs] jumped on the project,” he reveals. “But once he jumped on board he was working around the clock—nonstop trying to add to this project and deliver for me, and make it really special.” The attention of Combs—and a crew of producers from the UK (Jae5 and P2J), the US (Timbaland, Mike Dean), and Nigeria (LeriQ, Telz, and Rexxie)—has pushed, challenged, and evolved his bespoke Afrofusion sound. That soul-stirring blend of dancehall, pop, R&B, and Afrobeat has never sounded more confident, and Burna himself has rarely sounded so impassioned.

See Each Track Production Credit Below

Track 1, “Level Up” (Twice As Tall) is produced by DJDS and @leriq

Track 4, “Bebo” is produced by @rexxiepondabeat

Track 5, “Wonderful” is produced by @_telz

Track 8, “Comma” is produced by @rexxiepondabeat

Track 12, “Monsters You Made” is produced by @leriq

You Can STREAM The Album HERE

Also See Other Credits of ‘Twice As Tall’ Album below 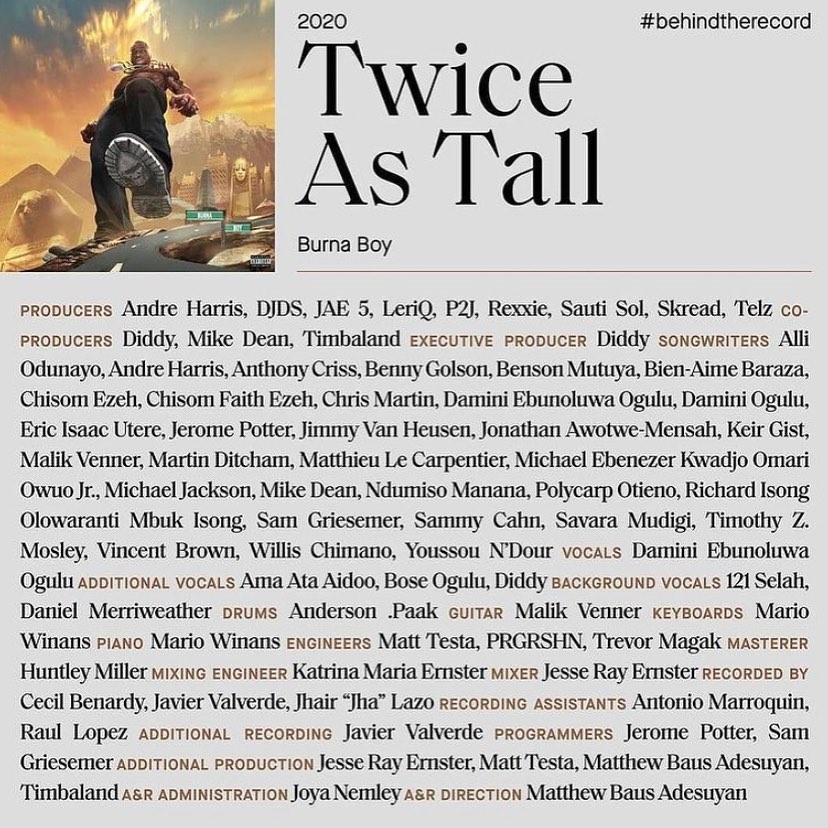 After ‘Twice As Tall’ won the Best Global Music Album Award, Burna Boy gave a special shout-out to everyone that contributed to the success of the Masterpiece Project;

“To all the incredible humans that breathed on this project! My brothers for life! I want to say a huge thank you! Your contributions got us here! May we keep striving and thriving! Love you all!!

From Youssou the living legend, JEREJEF! Chris Martin aka one of the best humans on the planet having my back through this process to my bro Stormzy delivering melodious bars, Sauti sol the gang! We created this song on a full stomach and love around us, Naughty by Nature the absolute legends! Diddy pulling in the A-team to sprinkle some Magic over the vibes

The OUTSIDERS! you’re in a league of your own! All the INCREDIBLE producers“

The post Here Are The Producers Of The Grammy Award Winning Global Music Album – “Twice As Tall” by Burna Boy appeared first on tooXclusive.