Wizkid Can’t Be Addressed As a ‘Grammy Award Winning Artiste’ Yet!… Here’s Why 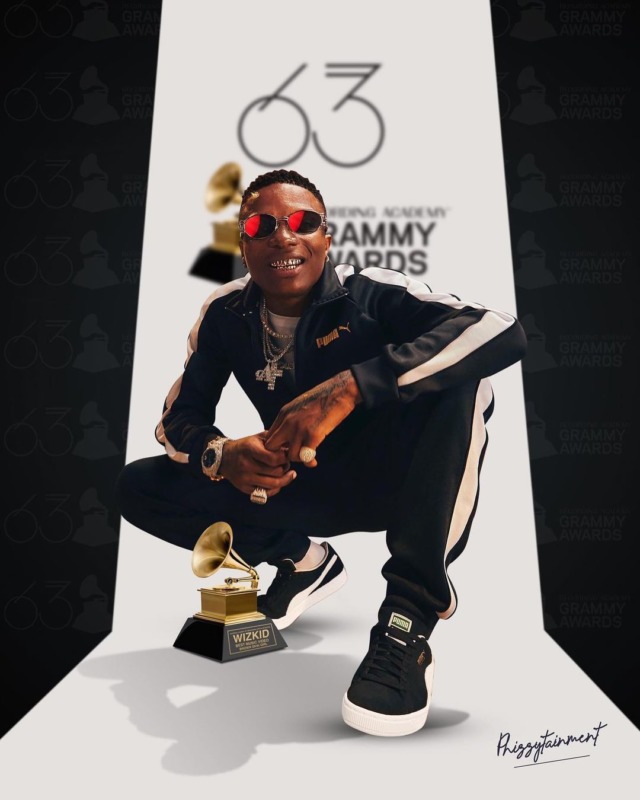 “If you want make he ginger, give am grammy award”… lol

It’s amazing how Wizkid ‘s sound metamorphose from the conventional Afrobeats to his sultrier, silky sound we can’t seem to get enough of. Wizkid is one Nigerian Artist that has effortlessly established himself globally and locally. I mean, how many Nigerian Afrobeats artists have received a quarter of the massive international recognition our very own Starboy is enjoying.

Wizkid as an artist can’t be boxed in one genre of music, this guy flows fluidly from Afrobeats to Reggae, hip-hop, dance hall, and even rap. We have seen Newbies in the music industry stylishly try to tap into Wizkid’s unique sound and style, we can’t say they have succeeded as Wizkid’s sound is still distinct. Let’s roll to the Grammy Awards….

Nigerians home and abroad were anticipating Burna Boy and Wizkid’s Grammy awards after they were nominated in different categories. When the news of Burna’s victory was announced, Twitter street was literally on fire. But before Burna’s news hit the Internet, Starboy has already started shinning on social media. News and tweets were flying from different angles that Starboy won a Grammy award for his feature on Beyonce’s Brown Skin Girl Music video.

Hate to burst your bubble, but Wizkid didn’t win a Grammy Award and as such he can’t be addressed as a ‘Grammy Award Winning Artiste‘ yet. Therefore Keypad warriors/Reporters should refute claims that he is the first artiste out of Nigeria to win a Grammy Award. Calm down, Calm down. He only received Grammy recognition for his feature on Beyonce’s Brown skin girl which won the award for Best Music Video of the year. According to Grammy Rules, the golden gramophone belongs to the main Artist and the creatives of the video. Let’s break this down. If Beyonce’s The Lion King Album had won the ALBUM OF THE YEAR, Wizkid would have gotten his own golden gramophone, not a grammy certificate as he received. Grammy rules also state “Featured artists are GRAMMY-eligible in Album Of The Year if they perform on more than 33% of the playing time of an album; they are eligible in the genre album categories if they perform on more than 51% of playing time; and are eligible in performance categories if they are credited as a featured artist on the track”.

Surprisingly, this is Wizkid’s second attempt at winning his own Golden Gramophone. In 2017, Drake’s the Views Album got nominated for the Album of the Year and the Best Rap Album at the 58th Grammy Awards. Wizkid alongside Kyla featured on Drake’s hit song One Dance, Wizkid co-wrote and co-produced the song. So imagine if the album had actually won at the 58th Grammy Awards in 2017, Wizkid would have been a Grammy Award winner long before Burna Boy.

Wizkid isn’t the only Nigerian artiste who was close to winning a Grammy Award. In 1984-1999 King Sunny Ade was nominated for a Grammy award. From 2003-2014, Femi Kuti also received nominations for some of his albums like Fight To Win, Africa for Africa, Day by Day. In 2018, Seun Kuti was nominated for the Black Times album. In 2021, Tiwa Savage, Femi Kuti, and Made Kuti were close to winning Grammy recognition for their Contribution to COLDPLAY’S Album, but it was misinformation on the part of the Recording Academy as Taylor Swift’s FOLKLORE ALBUM won the Album of the year.

He might not have won a Grammy Award, but he has bagged numerous awards over the years. He won a Soul Train award for his feature on Beyonce’s Brown skin girl, alongside Blue ivy and Saint JHN. He won three Billboard Music Awards for his Collaboration in Drake’s “One Dance”. Wizkid is the first Nigerian (if not African) to bag an international award from The American Society of Composers, Authors and Publishers (ASCAP) for his role in writing “One Dance”. Wizkid is the first Afro-pop artiste to appear in the Guinness Book of World Records. This is related to his songwriting credits for the ‘One Dance’ which has the Guinness World Record as the most played song on Spotify with over 1 billion streams. He is also the first African to sell out London’s most iconic venue, Royal Albert Hall in less than 72 hours. Wizkid won the 2020 Music of Black Origin Awards (MOBO) for the Best African Act. That was Wizkid’s fourth MOBO win. He has won the MOBO “Best African Act” and “Best International Act” Award at different times.

All these are “some” of his international awards, if we dig up his local/Nigerian wins, you will literally customize a Grammy award for Wizkid. If there’s one artiste we are certain can lure the Judges at the Recording Academy with his talents for a grammy award, we are positive it will be Wizkid. Not dwelling on his unique sultry voice, Wizkid has proven to music fans that he is eligible to be a receiver at the next Grammy awards.  He effortlessly basks in Fela’s and Sunday Ade sound quite similar to the sound Burna Boy Tapped into for his Grammy Award-winning album “Twice as Tall”. His soft and soothing Album “Made In Lagos” might not win in the Best Global Music album category, that is okay. We won’t mind so long as the Grammy gives it the Album of the year award. Lol

To cut the long story short, Wizkid can’t be addressed as a Grammy Award Winning artiste for now because he doesn’t have a customized Grammy Plaque like Burna Boy. Based on Grammys, we still need to push our Starboy farther and hope his new impressive project, ‘Made In Lagos’ or other forthcoming projects brings home an actual Grammy Plaque.

The post Wizkid Can’t Be Addressed As a ‘Grammy Award Winning Artiste’ Yet!… Here’s Why appeared first on tooXclusive.