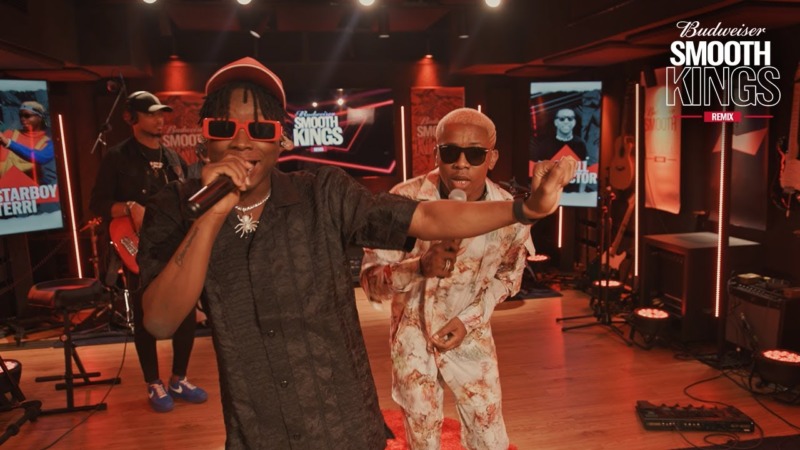 So far, it has been a spectacular show with guest artistes like Orezi, CKay, Niniola, Chike, Oxlade, Ycee, Vee, and Joeboy rendering amazing live performances.

On the 5th episode of the show, Budweiser brings to you one of the new age music acts, Terry Daniel Akewe, also known as Starboy Terri, and the “Penalty” crooner, Adekunle Temitope, popularly known as Small Doctor.

Telling us about how it all started, Terri says his very first song was his collaboration with Wizkid, Soco. A couple of months after, he came out with his own single. Prior to that period, he had no idea what it felt like to have a song that everybody loved.

Omo Iya Teacher, Small Doctor recounts that his first single was in high school, he was quite lucky because it was generally accepted in his hood, ever since, it has been a benchmark for his success.

Our Kings of the week had a chit chat before moving down to Budweiser’s official recording studio, in Lekki, Lagos, where Gospel On De Beatz already has a beat waiting for them.

The artistes are both excited with what he had already created for them and cannot wait to dive into it, Gospel as well is elated to be working with the duo.

Next, up, our kings move on to select the outfits for their performance, and they both go with simple, but edgy.

Now is the time we all have been waiting for, the time for the stars of the week to shine bright like diamonds on the stage, as they gave their very best live performance of the 2012 classic “Danfo Driver” by the outstanding Duo, Mad Melon and Mountain Black – former bus drivers who believed in hard work and dignity.

Danfo Driver was one of the first-ever Nigerian songs to be used in a Hollywood film, “Fat Girls”. Sadly, Mad Melon, Omeofa Oghene died in an accident in September 2019. May the good Lord rest his soul.

Needless to say, Small Doctor and Terri The Starboy gave us a premium performance, and Black Mountain was watching patiently and nodding his head in agreement to their fire performance.

His remark was “It was nice. I was not even expecting this. Danfo Driver is a true-life story, but unfortunately, my partner is not here.”

And that brings us to the end of yet another spectacular episode, catch us in the next one.