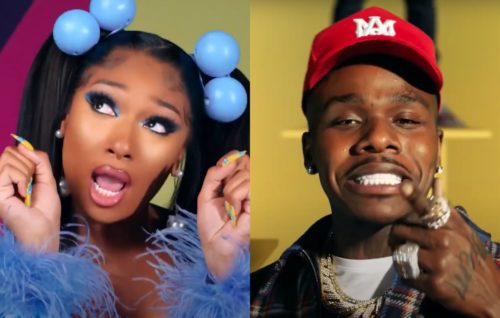 Megan The Stallion has unfollowed DaBaby and shockingly, her fans are happy about the new development.

After several collaborations that birthed hit tracks, things seem to have gone south in their camp. The duo has been on songs like “Cash Sh*t,” “Nasty,” “Cry Baby,” and DJ Khaled’s “I Did It,”; there were the perfect pair.

However, fans have been questioning Megan and DaBaby’s friendship ever since his “SKAT” collaboration with Tory Lanez surfaced, and after the music video dropped, there was further speculation that their relationship had gone sour.

It was not long after that fans discovered that Megan had removed Da Baby from her list of followers. However, DaBaby, on the other hand, still follows Megan. The speculation that their friendship had a dent began when DaBaby and Tory Lanez linked up on a track.

Megan reacted to this by sharing a crying emoji via her Instagram page, before going on to announce that “Cry Baby” video would be out soon.

Earlier this month, Tory Lanez sat down with “Million Dollaz Worth of Game” and reflected on his fellow artists turning their backs on him following his arrest related to the shooting incident involving Megan nearly one year ago.

Even the people who came out and said anything about me, a lot of them, after the fact or after the music came out, they called me like ‘I still f*ck with you, just at the time, XYZ. But there’s nothing wrong with that.