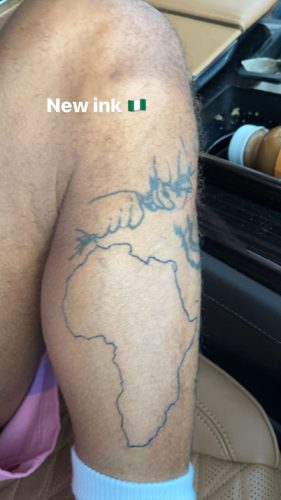 Swae Lee is another artist that has come forward to show that he has African roots.

Earlier, the American rapper, whose real name is Khalif Malik Ibn Shaman Brown, but professionally known as Swae Lee shared his newest ink via his Insta-story a couple of hours ago.

From the image shared, it could be seen that the singer and songwriter tatted the map of Africa on one of his legs, revealing his deep connection with Africa.

You would recall that the 28-year-old insisted that his jewelry was stolen from his hotel room and that the hotel might be responsible.

Swae Lee claimed that a stay in the Mondrian Hotel in South Beach robbed him of $300,000 worth of jewelry, and he wants the hotel service staff to be held accountable for his loss.

According to reports by TMZ, Swae Lee checked out of the Mondrian on Thursday, 10th of June, and had told the authorities that he was missing a couple of chains and a bracelet. However, the hotel staff was able to retrieve the bracelet but not the chain.

The hotel is working in full cooperation with the police and authorities. Always, the safety and security of our guests and colleagues remains our top priority, said the hotel.