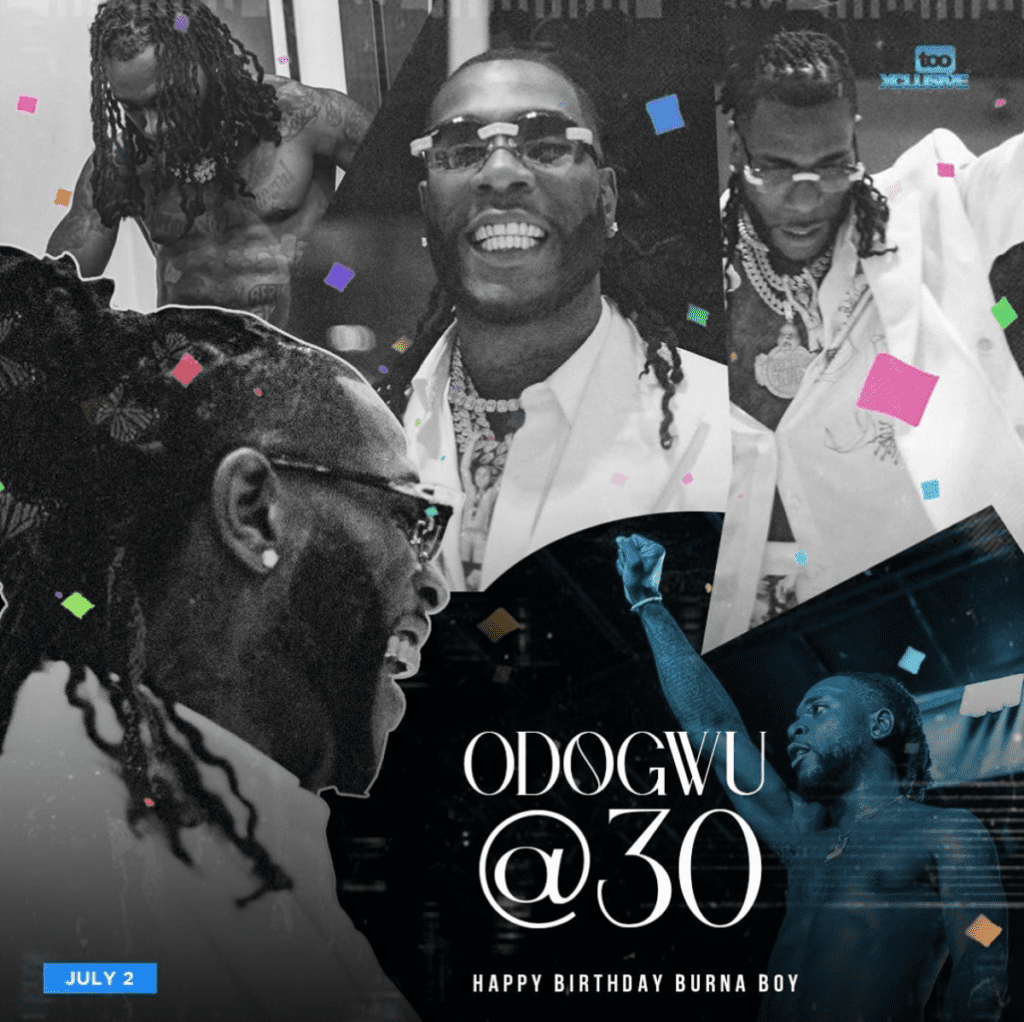 (Big 30) With his fusion of dancehall, reggae, Afro-beat, and pop, Burna Boy emerged in the early part of the 2010s as one of Nigeria’s fastest-rising stars. The LeriQ-produced 2012 single “Like To Party” proved to be his breakout track and paved the way for his full-length debut, L.I.F.E, a year later.

Burna Boy real name Damini Ogulu, was born in Lagos in 1991 (1991-2021, 30 years now). He began making music at just ten years old when a fellow classmate at school gave him a copy of the production software FruityLoops. Armed with these means, he began to create his own beats on an old computer. After he graduated, he moved to London to attend university, but he dropped out after two years and moved back to Nigeria.

In 2010, the 19-year-old Ogulu traveled to Nigeria’s southern coast, where a mutual acquaintance, producer LeriQ, had some studio space. This marked a period when he began to connect to the music of his native country, having spent most of his youth immersed in American acts like DMX. He delved into the dancehall and reggae music his father listened to, and explored the Afro-beat music preferred by his grandfather (who had also been Fela Kuti’s first manager). As a result of his new discoveries, Ogulu created a confluence of genres that would become his signature sound… Afro-Fusion

With production by LeriQ, Burna Boy created “Like to Party,” which marked his rise to prominence and generated a local buzz along the way. 2013 saw the release of his debut studio album; featuring guest slots from Wizkid, Timaya, 2face, and M.I., L.I.F.E drew favorable reviews from the music press. In 2018, Burna delivered his third album, Outside, later in the month after releasing the -aided single “Heaven’s Gate“. The Outside album housed the Mega Hit song that revived Burna Boy and blew him International, YE.

He returned a year later with the single “Killin Dem,” a collaboration with Zlatan. Along with additional singles like “Dangote” and “On the Low,” it was later included on his fourth album, African Giant, which saw release in July 2019. The LP was nominated in the Best World Music Album category of the 62nd Grammy Awards.

In August 2020, Burna issued the full-length Twice as Tall (his fifth studio album), which included the single “Wonderful.” Featured on the album were guest appearances by Naughty by Nature, Stormzy, Sauti Sol, Coldplay’s Chris Martin, and others. This album won him the Grammy Awards as it earned the Best World Music Album at the 63rd Grammys.

Burna Boy has achieved a lot within the space of 5 years; From Sold-Out shows to World Tours, Performing at Coachella to Winning the Grammy as a Solo Artiste and BET Awards 3 Times, back to back.

Below are 30 Best Burna Boy songs so far to mark his 30th Birthday;

You can send in your wishes and also share your thoughts about the above listed 30 Best Burna Songs in the comment section.