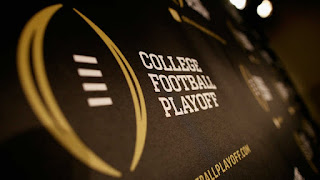 Conference championship weekend provided a much needed moment of calmness and relative normalcy after a week of college football unlike any other.

Lincoln Riley left Oklahoma for USC while Brian Kelly left Notre Dame for LSU — two coaching moves with seismic impacts that could change the landscape of the sport. On top of that, meetings were held about the future of the College Football Playoff, with the main topic including expansion. As the other talks have gone in the last several months, nothing concrete was agreed to.

The biggest debates of this playoff were if No. 6 Notre Dame (11-1) had an outside shot at making it despite not having a conference title and having a fairly weak schedule. The other big debate for much of the first few months of the season was whether Cincinnati, a Group of 5 school out of the American Athletic Conference, could do what no Group of 5 has ever done and make the playoff.

The Bearcats won the AAC title to finish the regular season 13-0 and ranked at No. 4, the first time a G5 team has even been in the rankings. With their ticket likely punched, they'll presumably join No. 2 Michigan, which routed Iowa 42-3 in the Big Ten title game and both of No. 1 Georgia and No. 3 Alabama who played in the SEC title game.

With that, Sporing News takes a look at the upcoming CFP semifinal matchups and eventual national championship game and has all the information you need to catch it in action:

When is the College Football Playoff national championship?

How to watch CFP national championship in 2021

The CFP national championship game will take place on ESPN. Chris Fowler will handle play-by-play duties while he's joined by Kirk Herbstreit as an analyst and Holly Rowe as a sideline reporter. Fowler and Herbstreit have called every CFP national title game since its inception in 2014, while Rowe has been involved in all but one game thus far.

This season's College Football Playoff semifinals will take place at the Rose and Sugar bowls in Pasadena, Calif., and New Orleans, respectively. Both games will air on ESPN on New Year's Day. Here's a look at the schedule:

The remaining New Year's 6 bowls — through which the Playoff semifinals rotate — will bring up the rear of the 2021 college football season. This year, the Fiesta, Peach, Rose and Sugar bowls will be the non-CFP semifinal matchups. Like the semifinals, each of these games will air on ESPN. Here's the full schedule:

There have been a number of bowl games canceled due to COVID-19. Here's a rundown of the ones that have been called off so far in the 2021-22 bowl season.

So far, three bowl games have already been outright canceled.

Despite the withdrawal of Miami from the Sun Bowl, Washington State is reportedly still looking for an opponent in the game. However, Action Network's Brett McMurphy reports that none of the three teams that lost their bowl game due to opposition COVID-19 outbreaks — Memphis, East Carolina and SMU — will fill that vacancy.

Sun Bowl still seeking replacement as of Sunday night for Miami, source told @ActionNetworkHQ. However, it won’t be Memphis, SMU or East Carolina, the 3 teams impacted by canceled bowls. Each program said their seasons were done after their respective bowls were recently canceled

The Sun Bowl is scheduled for Friday. McMurphy reported it is unknown if the team will be able to find a replacement.