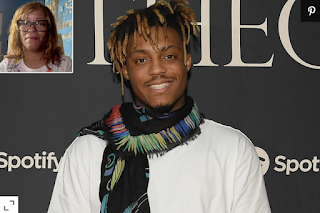 Juice WRLD is being commemorated by loved ones, just shy of the second anniversary of his death from a fatal overdose.

The late rapper's mother, Carmela Wallace, has shared a moving letter to her son on Tuesday — which would have been his 23rd birthday.

"When you were born 23 years ago, I never expected that you would not be here today celebrating your birthday," Wallace wrote, per Complex.

"Although it has been nearly two years since you've been gone, I still think about you every day, and losing you has changed my life forever," she continued. "I'm glad that we always made sure that we said goodbye when we left each other because we didn't know when we would see each other again."

"I would have tried to get as many birthday wishes in as possible like I always did on your birthday when we were together," Wallace, who founded the Live Free 999 foundation in memory of her son, wrote.

"I promise to continue your message of healing and use Live Free 999 as an avenue to normalize the conversation around mental health and substance dependency and help those who suffer in silence," she added in the emotional message.

According to its website, Live Free 999's mission "is to support programs that provide preventative measures and positive avenues" to those dealing with mental health and drug abuse issues.

The "Righteous" rapper died on Dec. 8, 2019. The following month, Juice WRLD's cause of death was revealed to have been an accidental overdose of oxycodone and codeine.

The rapper, born Jarad Anthony Higgins, often included lyrics about drug use in his music, a choice his mother explained was to try to let listeners struggling with addiction know they aren't alone.

Alongside the Fighting Demons album trailer released on YouTube last month, Carmela and record label, Grade A, described the artist as "searingly honest about his struggles and through his musical genius he articulated what was on his heart and mind vividly through his art."

"He never gave up and had many loved ones and friends around him who never gave up on offering their support to him. Today we announce that we will commemorate his upcoming birthday with a new album 'Fighting Demons' on Dec 10th."

"We encourage all of you who struggle with addiction and mental illness to never give up the fight," the statement read. "We continue to extend free support to you via the fund created in his honor: LiveFree999.org"

If you or someone you know is struggling with addiction, please contact the SAMHSA substance abuse helpline at 1-800-662-HELP.