Newcastle Vs Man Utd: Kick-off time, Where To Watch 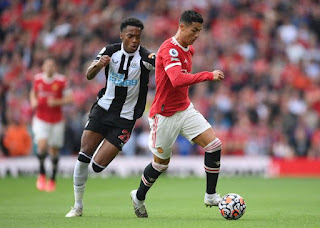 Manchester United are preparing for their first slice of action in over two weeks as they make the trip to Newcastle following the Covid crisis in camp.

Both sides contest the Premier League meeting at St James's Park after United's last clash against Brentford was called off following the temporary closure of their Carrington training ground.

Ralf Rangnick will be hoping his side can continue where they left off after their last fixture - a 1-0 win over Norwich at Carrow Road on December 11.

But Newcastle boss Eddie Howe will be keen for his side to reverse their slump and cause an upset after three defeats on the bounce, during which they've conceded 11 goals.

Here is all you need to know about the match.

When is the game?

Newcastle and Man Utd will meet at St James's Park on Monday, December 27.

Time: The Premier League match is scheduled to kick-off at 8pm.

United won the fixture between the two sides at Old Trafford earlier in the campaign, running out 4-1 winners - the same scoreline by which they won in this fixture last season.

The previous meeting between the sides was billed as Cristiano Ronaldo's second debut after his return to the club.

What channel is it on?

Coverage will begin from 7:30pm.

It will also be available to stream live on the Sky Go app.