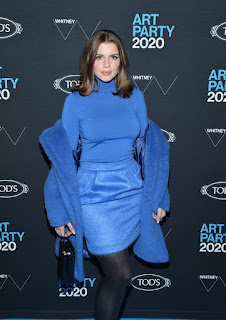 Born to an American father and Italian mother, Julia Fox was born in Milan, Italy, on February 2, 1990.

Having lived in Italy in her early years, she moved to New York City at the age of six.

The 31-year-old is currently an actress and filmmaker who rose to fame during her appearance on Uncut Gems, for which she was even nominated for the Breakthrough Actor Award at the Gotham Awards in 2019.

As of January 2022, Julia has an estimated net worth of about $6.5million.

The Italian-American actress has been married to Peter Artemiev since 2018. He is a pilot by profession.

Their son, Valentino, who was born in January 2021, is the only child they share together.

However, an article by Page Six stated that she is allegedly in a tumultuous relationship with her husband because she made some scathing remarks about him on Instagram in the week of Christmas 2021.

Some of the statements she stated on Instagram was that: “This man left me with a 5-month-old and a dog and a home and ALL THE BILLS. It’s wrong!!! It’s not fair. I can’t even do it anymore. I just don’t want my son f–ked up cuz he feels like his dad was absent or loved alcohol and partying more than him.”

In responding to these comments made by Julia Fox, her husband, Artemiev, told Page Six that: “I was saddened to learn of the utterly false statements made on social media by Julia Fox, my co-parent, who is clearly struggling. Out of respect for her privacy and to protect our child, I will not comment further.”

An exclusive report by TMZ reported that she was seen on a date with Kanye West in Miami, Florida, on January 1, 2022, at the Carbone restaurant.

Even though Julia and Kanye appeared to be having a good time, it is not clear if they are officially dating.

West was also seen out with Yasmine Lopez.